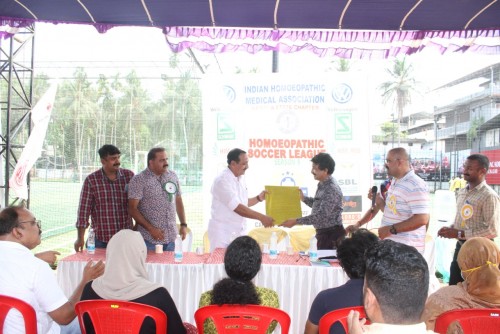 27 th March 2022- Another memorable day for IHMA Kerala. IHMA - HSL Season 3 after a long break due to Corona was conducted at Calicut Arena Football turf hosted by IHMA Kozhikode.

After the kick off, every match was played like a final one where sportsman spirit, unbounded energy and team spirit played the prominent role. Of course there were yellow cards coming out of the referee's pockets many a times, but it was still a gentle manly play as compared to the previous years.

The final whistle was blown by 10:30 pm and the final results were as follows

Tournament was sponsored by

Trophies were sponsored by

The entire program was well planned and executed without any complaints by the team lead by Convener Dr. P. Jibil, State Secretary and Chairman Dr. Ranjith, State Sports Committee Chairman. Other committee members include

We had a shootout game for the ladies present. Dr. Ayisha Jinjusha became the topper with two goals, and Dr. Subaida came second with one goal.

I am thankful to each and everyone involved in the smooth conduction of the tournament starting from the State President down to every single player and visitor. Still it will be an unpardonable crime if I fail to mention the active participation of the members of our women's wing of IHMA Kozhikode lead by State Women's Wing Coordinator Dr. Latha D.  She managed the food counter in the most admirable manner. Dr. Subaida, President, IHMA City chapter was present full time with family and shared the responsibilities of food management. They were helped by Dr. Noufira and Dr. Ayisha Jinjusha.

I wholeheartedly appreciate the noble gesture of Dr. Uvaise who sponsored 5 litres of high-quality sherbath essence and that of Dr.K. Saji for sponsoring 100 kgs of watermelon both of which quenched the thirst of our players. Dr. Sajin Sponsored the disposable items needed for the event